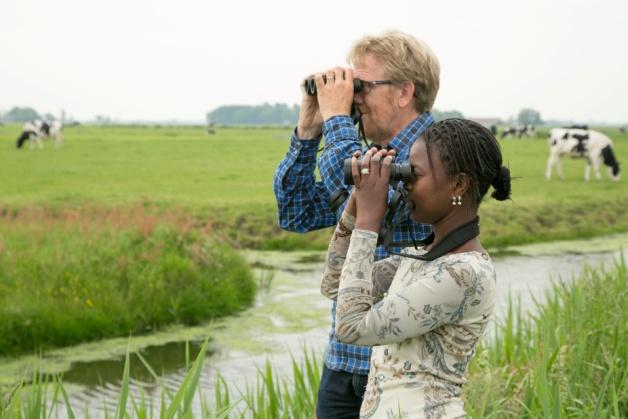 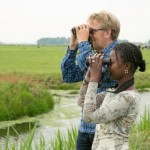 
Through the work of BirdLife International, Africa and Europe have come together many times for the love of birds. Khady Gueye from Senegal and Gerrit Gerritsen from the Netherlands offer a fine example of this. Both Khady and Gerrit are passionate about Black-tailed Godwits (Limosa limosa), a ‘Near Threatened’ migratory shorebird. Khady studies them while they winter in Senegal and Gerrit is the godwit conservation specialist of Vogelbescherming Nederland (VBN, BirdLife in The Netherlands). He makes every effort to conserve the breeding habitat of the godwits in The Netherlands. The linkage between the two is even stronger. A bird ringed by Gerrit in 2007 went missing for six years, only to be rediscovered alive and well by Khady in Senegal in 2013.

Khady met Gerrit during her visit to Friesland, a province in the North of The Netherlands. Here she joined the researchers from the University of Groningen / Global Flyway Network to study the breeding habits of Black-tailed Godwits. Thanks to the team of Prof. Theunis Piersma and Jos Hooijmeijer, Khady learned a great deal about godwits and research techniques that will help her study.
Khady: “My job was to assist the team in their research; looking for nests and chicks, monitoring and ringing chicks. We also captured adults to read their rings and conduct biometric measurements. I improved my skills in reading rings and I now have a clear idea on how to study the availability of feeding resources for the birds at a site.”

Khady proved to be a valuable member of the team and her interest in the Black-tailed Godwit and determination to continue her research was held in high esteem by the entire team in the Netherlands. Khady: “Most exciting was working with the research team of Jos Hooijmeijer in the Netherlands, and the prospect of them coming to Senegal during the next season. While I was there, I better understood the ecology, migration strategies, as well as threats to the Black-tailed Godwit. ”
Overall Khady was highly impressed by what she saw in the Nederlands. “From my point of view, it is a very organized country. In Friesland in particular, people are friendly and pleasant. In this part of the Netherlands, the conservation of biodiversity and especially birds, is extremely important to the community.” To strenghten the commitment of the local community, Khady also particpated in a succesful visit of school children to a farm where many godwits breed. Khady’s presence emphasised the international connections that we have through migratory birds.

Young Graduates Research Project
Khady Gueye is a one of the awardees of the Young Graduates Research Project (YGRP) award, a conservation project grant under The Conservation of Migratory Birds (CMB) project, funded jointly by MAVA Foundation and Vogelbescherming Nederland (VBN).
This award is targeted at MSc-level students conducting ongoing research on migratory bird species in Cape Verde, Guinea, Guinea Bissau, Mauritania, Senegal, Sierra Leone and the Gambia.
This is a recurring award and the next grant opportunity will be announced shortly so stay tuned to the CMB project page!